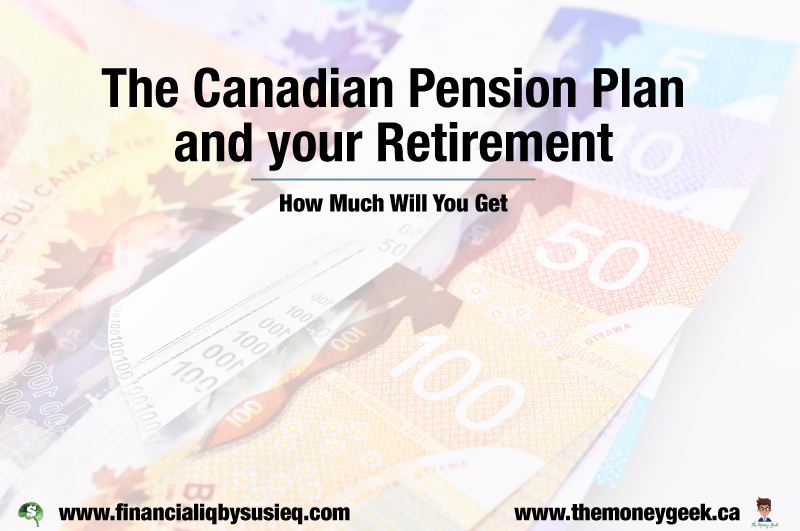 Note from Susie Q:  When I published my post on Social Security, I promised my Canadian readers a similar post about the Canada Pension Plan.  It took a while, but here it is!  Graeme Hughes, the Money Geek, was kind enough to write it for me.

Graeme Hughes is an accredited Financial Planner with 23 years of experience in the financial services industry. During the course of his career he completed hundreds of financial plans and recommended and sold hundreds of millions of dollars of investment products. He believes that financial independence is a goal anyone can aspire to, and is passionate about helping others to live life on their own terms.

The Canada Pension Plan (CPP) is a foundational part of all Canadians’ retirement plans, as it represents, for many, the single largest government benefit they will receive during retirement. Over the years, opinions on the plan have varied widely, with many suggesting that younger Canadians shouldn’t count on receiving CPP benefits in retirement.

As it stands today, is this a realistic opinion, or is the reality something different? How does the CPP work, and can it be relied upon to deliver a meaningful amount of pension income to future retirees?

How The Canada Pension Plan Differs From Old Age Security

There are two core retirement benefits that the vast majority of Canadians are eligible to receive: the Canada Pension Plan and the Old Age Security (OAS) benefit.

OAS is a benefit that is funded from tax revenue. Both eligibility and the benefit amount paid are based on the number of years an individual has been resident in Canada prior to his or her 65th birthday. Benefits may be reduced for high-income seniors.

The CPP, on the other hand, is a true contributory pension plan. This means that benefits are available only to those who have contributed, and the amount you receive is directly linked to the amount paid into the plan over your working life. CPP contributions are held separate and apart from other government revenue, and CPP benefits are not income-tested.

A Brief History of The Canada Pension Plan

The CPP has had more than 50 years of success in providing pension benefits to Canadian seniors. But a lot has changed along the way:

Is the Canada Pension Plan Sustainable?

Many pension plans, both public and private, have been struggling with sustainability over the last many years given demographic changes (the retiring boomers) combined with very low yields on fixed-income investments which often form the backbone of pension assetsThe value of things the company owns and amounts it is owed.

Fortunately, the CPPIB has an oversight regime that continues to account for such changes. Canada’s Office of the Superintendent of Financial Institutions appoints a Chief ActuaryA professional who assesses and manages the risks of financial investments, insurance policies and other potentially risky ventures. Source: www.investopedia.com/terms/a/actuary.asp, who has as one of their responsibilities a review of the sustainability of the CPP. This review is conducted every three years.

The last reported review, in 2016, concluded that the CPP would be able to fully meet its commitments for at least the next 75 years (the length of time covered in the review), as long as a target rate of return of 4% in excess of inflation was maintained.

The chart below, from the 2019 annual report, highlights the sustainability of the plan as reflected in the historical and forecast growth in assetsThe value of things the company owns and amounts it is owed: 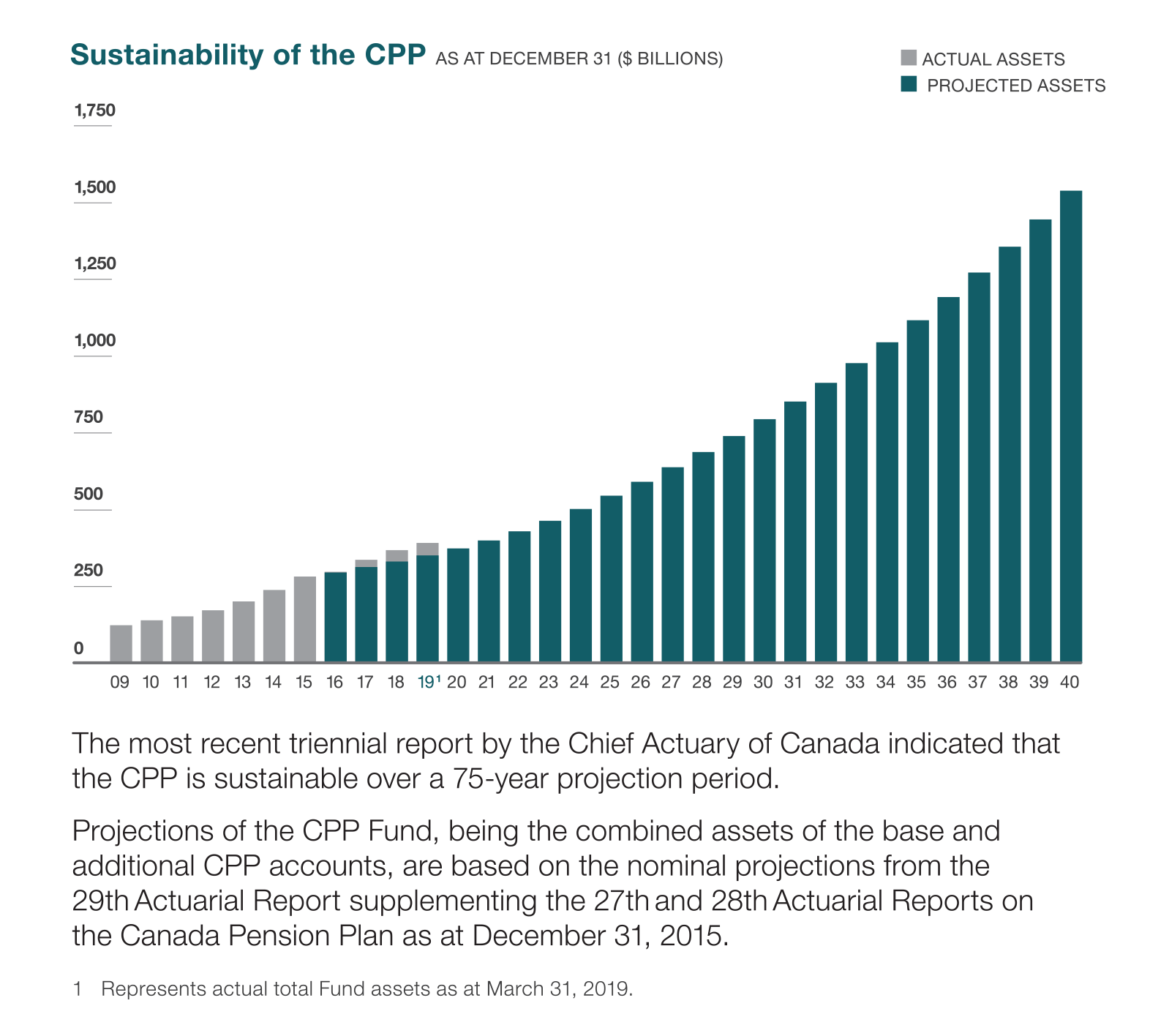 Clearly, the CPP is in great shape to serve the needs of Canada’s current and future retirees. Even if this should change at some point in the future, the Chief ActuaryA professional who assesses and manages the risks of financial investments, insurance policies and other potentially risky ventures. Source: www.investopedia.com/terms/a/actuary.asp has the authority to adjust contribution rates to maintain sustainability, should that be necessary at a later point in time.

How Are CPP Contributions Calculated?

CPP contributions are based on an individual’s income, and split equally between employer and employee. Contributions are calculated on the amount of annual income earned that is between $3,500 (the lower cutoff) and $57,400 (the 2019 upper cutoff). Up until 2019, the contribution rate on these amounts had been 9.9%, but a new CPP enhancement that started in 2019 raised that to 10.2%.

It’s important to note that, while the lower cutoff amount is fixed, the upper cutoff is adjusted each January to reflect changes in average Canadian wages. Remember too, that the contribution rate of 9.9% had been in place until last year, with the CPP “enhancement” starting in 2019. The impact of the enhancement will be looked at later in this article.

What Benefits Can I Expect from the CPP?

The “base” calculation for CPP benefits assumes an individual applies for benefits at the normal retirement age of 65. In 2019, the maximum benefit for new retirees under this base scenario is a CPP payment of $1,154.58 per month. All CPP benefits are adjusted each January to account for changes in the Consumer Price Index.

There are also a variety of adjustments made to the calculation of your CPP entitlement. For instance, you are allowed to drop your 8 lowest-earning years from the calculation. There are also adjustments for years spent rearing children under the age of 7, for periods of disability and for other circumstances. For these reasons, calculating your potential future benefit at any point in time is virtually impossible to do on your own. Fortunately, the good folks at Service Canada are happy to do the work for you, and an estimate of your individual benefit can be obtained by phone, or online through your My Service Canada Account.

When Should I Apply for the Pension?

Although the “base” calculation for CPP benefits assumes retirement at age 65, in reality, you have the option of applying for benefits anytime between the ages of 60 and 70. However, the amount of benefit you receive will be adjusted accordingly:

The chart below outlines the change in monthly benefit given the age at which benefits commence, assuming an individual was eligible for $1,000 per month at age 65: 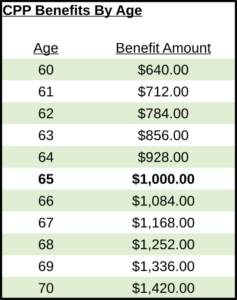 As seen above, the difference between taking your Canada Pension at age 70 versus age 60 is significant. You’ll receive over double the monthly amount. But the decision as to when to apply depends on a number of factors.

A big factor is, of course, your views on life expectancy. If you enter your early 60’s in poor health, or with a family history of shorter life expectancy, you may want to take the CPP as soon as you are eligible. If the opposite is true, you may want to wait until age 70 to ensure you receive the maximum amount of this inflation-adjusted and government-guaranteed benefit, to protect against the riskThe possibility that something bad will happen. of running short of savings and income later in life.

Of course, the amount and structure of your own savings, the amount and source of other retirement income, along with your actual date of retirement, will all weigh on your decision. If in doubt, consult a qualified financial planner to assess the merits of different options.

Up until 2019, the CPP was designed to replace about ¼ of a person’s average employment earnings once they retire. The current government has decided that should be enhanced such that the CPP will eventually cover about ⅓ of pre-retirement earnings.

To accomplish this, and to ensure that the newly enhanced benefits are self-funding, the CPP enhancement is being operated almost like an add-on benefit to the existing CPP.  CPP contributions for employers and employees are being increased above the previous 9.9% rate, over time, as follows:

In addition to the increased premiums noted above, the maximum annual earnings for CPP contributions will have an additional, “second ceiling” amount that will allow higher-income earners to contribute proportionately more to the CPP, starting in 2024.

The extent to which this CPP enhancement will increase your retirement benefits is dependent entirely on how much you individually contribute to the enhanced portion prior to retirement, both as regards the increased premium amount, as well as within the elevated earnings cap. However, those who end up contributing to the enhanced amount for a full 40 years could see their CPP benefits increase up to 50%.

Of course, if you are retiring in the next few years, you won’t have enough credit toward the enhanced amounts to make much of a difference to your benefits. These changes are really designed to have the most impact on younger workers who are in the earlier stages of their careers. Given the added complexity this new benefit adds to benefit calculations, it makes more sense than ever to keep track of your entitlement by obtaining occasional estimates from Service Canada.

More information on the CPP enhancement can be found here.

CPP And Your Financial Planning

In this article we have looked exclusively at the CPP as it pertains to retirement benefits. In addition, there are survivor, disability, and other benefits to consider as part of a well-rounded approach to managing personal finances. More comprehensiveAs it related to car insurance, a coverage that reimburses you for damage to or loss of your car from any one of a list of specified perils other than a collision.  Covered perils include theft, fire... More information on the Canada Pension Plan can be found on the pension benefits section of the Government of Canada’s website.

Remember that a good retirement plan is holistic and accounts for all sources of income, whether from government pension and benefits, employer-sponsored plans, personal savings or business ventures. Ideally, the information above will help with your planning and give you confidence that the CPP will indeed be there for you, regardless of your retirement date.

Why I Don’t Hold the All Seasons Portfolio

Selecting Stocks with a Score