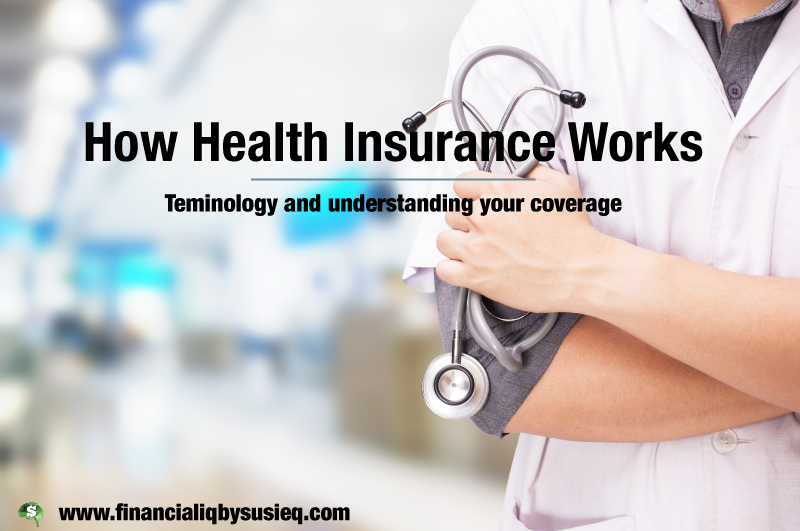 Health insurance is one of the most expensive purchases you will make every year, whether you buy it on your own or through your employer.  There are many terms specific to insurance and many more specific to just health insurance that are important to understanding how health insurance works.  In this post, I will explain many of the terms related to health insurance coverage. This post covers different ways to finance your portion of medical costs and provide you with a spreadsheet to help compare different options.

Many health insurance plans are constructed around a “network” or list of medical providers who have contracts with the insurer.   The list of medical providers in the network will be made available to you so you can review it. As discussed below, some health insurance plans reimburse you only if you go to providers in the network, while others reimburse a smaller portion of the costs if you go to an out-of-network provider. Plans that do not have a network are called indemnity plans. Under those plans, the reimbursement calculations are the same for all covered services.

Originally, HMOs were very strict in that they didn’t reimburse insureds for any expenses for out-of-network providers. They also required that you go to your selected primary care physician (usually, a general practitioner, family medicine doctor or internal medical doctor) before you could be treated by any other providers in the network, except in the case of emergencies.   Some HMOs today are a lot more flexible, but it will be important to read the description of each HMO option carefully to understand exactly it works.

PPOs are much more flexible in that they allow you to go to any medical provider in or out of the network. Your share of costs will usually be higher if you go outside the network.

Broadly, health insurance plans often cover “medically necessary” costs from medical providers (doctors, hospitals, various clinics) and prescription drugs. Dental and vision costs and over-the-counter drugs are generally not covered, but there are many exceptions. The specifics of what is covered varies widely from plan to plan and insurer to insurer. You’ll need to review the information you are provided carefully to understand what each option covers.

All health insurance plans I’ve ever seen have had some sort of a deductible.

The deductible is the amount of expenses that you need to pay before any payments are made by the insurance company. Understanding your deductibles is one of the most important aspects of understanding how health insurance works.

Examples of How Deductibles Work

Some plans, most often HMOs, require you to pay a fixed dollar amount for each visit. Other plans require co-pays on prescriptions. You’ll want to review your plan options to see if they use co-pays and for what services they are charged.

For example, let’s assume you have the same deductibles as in the example above and that in-network costs apply to the out-of-network deductible. In addition, the plan has 20% coinsurance in network and 30% coinsurance out of network. For this illustration, you have spent $1,200 at in-network providers and $1,300 at out-of-network providers. You have the same $200 of in-network expenses that will be partially reimbursed by the health insurer. With a 20% coinsurance, you will have to pay $40 (20% of $200) of those expenses and the health insurer will pay $160.

The out-of-network piece gets more complicated and is one of the hardest parts of understanding how health insurance works.

In the spreadsheet in this post, I’ve incorporated all of these formulas, so you don’t need to be able to reproduce the calculations exactly. It is still important to understand generally how they work

All health insurance plans I have seen also have a maximum amount on what you have to pay. That is, the health insurer will start paying for 100% of your covered expenses for the remainder of the year if your costs have exceeded the out-of-pocket maximum.

All of the examples I have provided above have assumed that you are the only person covered by your plan. Many plans also offer coverage options for just you, you and your spouse or partner, or you and your family. Under the “you and partner” or “you and family” options, there are two sets of deductibles and out-of-pocket maxima ─ one for each individual and one for the family.

Let’s assume you purchase coverage for you and two children. To keep things “simple,” we will assume that all of your expenses are in network. The coverage has a $1,000 per person and $2,500 per family deductible, a 20% coinsurance and out-of-pocket maxima of $5,000 per person and $7,500 per family. When evaluating how much the insurer will pay if your family has $25,000 of medical expenses, it depends on how much of those expenses emanate from each person in the family.

If two family members each had $10,000 of medical expenses and the third had $5,000 and the second person’s expenses were paid latest in the year, the calculations would be as follows:

Even though each individual’s deductible is $1,000, there is only $500 of family deductible left when Family Member #2’s expenses were paid, so you pay only $500 in deductible payments for that person. Because none of the values for the family members in the “Your Total Cost” row exceeds $5,000, there is no reduction in your total cost for the individual maximum. The total cost for the family is $7,000 which is less than the $7,500 family maximum, so it does not reduce your total cost either.

You can see that the $7,000 that you would pay if three family members contribute to the $25,000 of total medical costs is more than the $5,000 you would pay if all of the expenses were for medical care for only one person.

One of the benefits of having health insurance is that the charges that are covered by insurance are based on amounts that the health insurer has agreed to pay the provider. On almost every medical bill I’ve ever received, the health insurer has negotiated a charge that is somewhat to significantly less than the amount that the medical provider bills. Your total costs will be lower if your health plan has negotiated bigger discounts with providers than if you purchased another plan with smaller discounts. Unfortunately, I’m not aware of any publicly available information that quantifies the amounts of discounts under different plans or different insurers.

I have seen a few different ways that prescription drugs have been covered by health insurance. Under some plans, you pay one co-pay amount for name-brand drugs and a lower amount for generic drugs. In other cases, prescription drugs are covered the same way as other medical expenses. If you have a plan similar with this feature, you pay 100% of the negotiated cost until all of your medical expenses have exceeded the deductible and then you pay your coinsurance until you reach the out-of-pocket maximum.

Many thanks to Laura Kenney and Jingyi Huang for their help with this post.