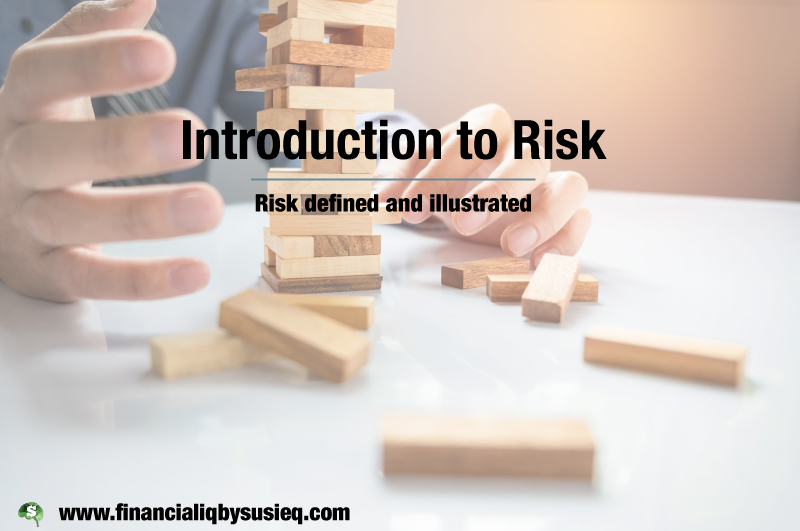 Risk is the possibility that something bad will happen.  Examples of bad things that have financial implications include:

Measures of Risk and Volatility

Most measures of risk have some element of probability associated with them.  A probability is a percentage or the equivalent fraction that falls between 0% and 100% (i.e., between 0 and 1).  It represents the ratio of the number of times that the outcome meets some criteria to the number of possible outcomes.

Let’s start with some simple, non-financial probabilities.  A coin has two possible outcomes – heads and tails.  When flipping a fair coin, it is equally likely that the result will be heads or tails.

There is one result (the first row) in which there are two heads.  The probability of getting two heads is therefore one result meeting our criterion divided by four possible results or 25%.

We can now extend this concept to a financial measure.  I downloaded the month-ending values of the S&P 500 from Yahoo Finance from 1951 through 2018.  I calculated the annual change in the index in each year to derive 68 years of returns.  Although the past is seldom a perfect predictor of the future, we can use it as a model of what might happen.  So, when I say there is a certain probability that the S&P 500 return will meet some criteria, I am using short hand for saying that it happened that percentage of the time in the period from 1951 through 2018.

The bar chart below shows the number of years in which the S&P 500 return fell into certain ranges. 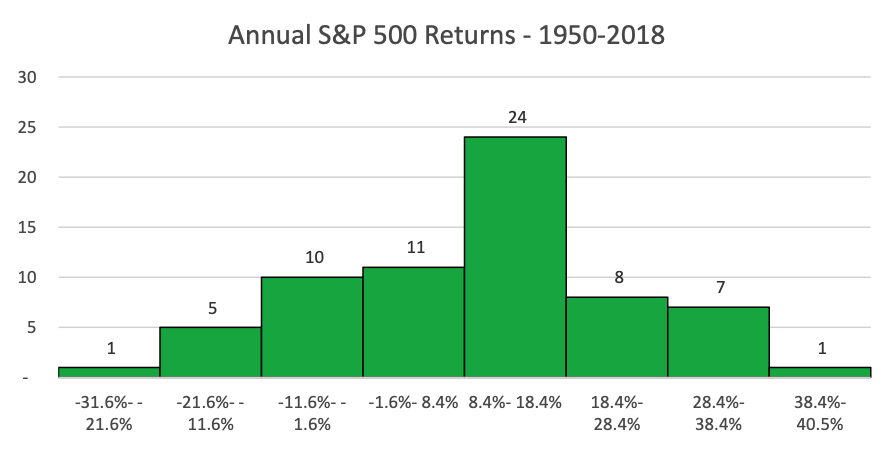 We can use this information to calculate the probabilities of certain results, as follows:

Sometimes people are not only interested in how often a bad result happens but also how bad it will be when it is worse than that.  For example, you might want to know the average amount you will lose in a year in which there is a loss.  Using the information above about the S&P 500, we would select only the 18 years in which return on the S&P 500 was negative and take the average of those returns. In this case, the average is -11%. With this metric, you now know that there is a 29% probability that an investment in the S&P 500 will lose money in a year and that, in those years, you will lose 11% on average. This metric is a richer metric than probability, but is also much harder to grasp so I won’t spend a lot of time on it.

There are many ways to illustrate risk graphically.  The bar chart of the S&P 500 shown above is one example.

The data can also be presented in a line graph.  A line graph is essentially the same as a bar chart except there is a point on the line rather than a bar corresponding to ranges of possible results. The line graph below shows the annual returns for the S&P 500.  The ranges I used in this chart are narrower than the ones I used in creating the bar chart, so the graph is bumpier. 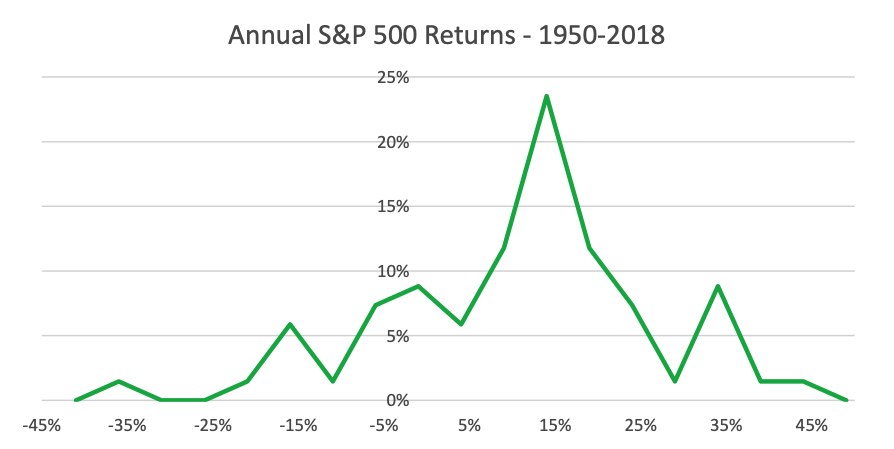 In this graph, I also changed the counts of the outcomes on the y-axis (the vertical one) to percentages or probabilities. A graph of the probabilities of possible results is called a probability density function or pdf. (Just in case you were curious.)

Symmetric and Skewed Distributions on a Line Graph

I mentioned earlier that some processes have symmetric results.  If both sides of the line chart are identical, then it is symmetric. The S&P 500 graph above isn’t quite symmetric, but it is close.  Relative to the mean of 8.4%, the possible results extend further to the left (in the downward direction) than to the right (in the upward direction).  That is, the worst observed result was -40% or 48 percentage points worse than the average.  The best observed result was +45% or 37 percentage points better than the average. 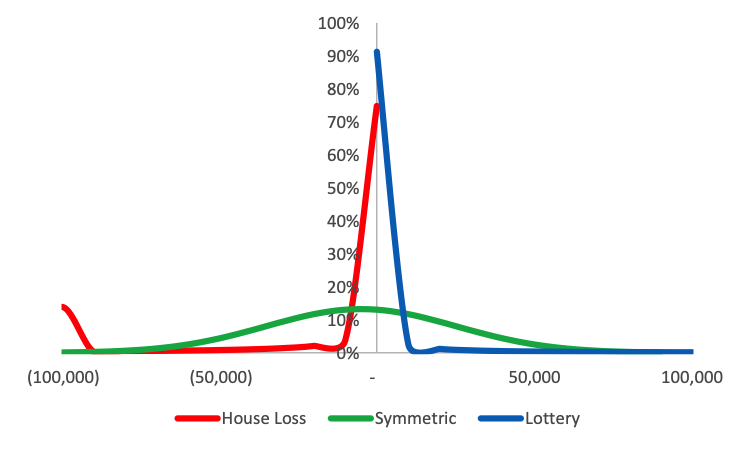 The green line in the graph above represents a symmetric distribution with an average of 0.  You can see that it is the same on both the right and left sides of the y-axis.

The red line illustrates the change in your financial position due to possible damage to your home before considering insurance.  There is a high chance you won’t have any damage ($0 change to your financial position). The probability you will have a small loss is small and the probability you will have a large loss (but less than the value of your $100,000 home) is tiny.  Interestingly, there is a larger probability of having a total loss than of have a large loss because, at some point, the damage because so expensive to repair that it is cheaper to replace the whole house.  This distribution is skewed and the long tail goes to the left.

For processes that have skewed results, the rules of thumb about standard deviations don’t apply, so looking at probabilities and average losses below a threshold are more informative.

Because Apple went public in early 1981, I used returns from 1981 through 2018.  I’ll use these monthly returns to demonstrate several ways of illustrating and comparing the risk of different investment options.

Some people prefer to look at the numbers.  The chart below shows five statistics that measure the volatility or risk of the five equity investments.

Boeing is a fairly large company, but looking at its stock alone offers no diversification (because you need two things, in this case companies, to create diversification). Therefore, its stock price has a higher standard deviation than either of the indices.  Apple, though a large company, has been a fast growing company so has had even more volatility in its stock price than Boeing.  It has the highest standard deviation of the four investments in the table.

The 25thpercentile (below which 25% of the monthly returns fall) is a measure of risk. We can see that this risk measure shows that these investments fall in the same order looking at this risk metric as when measuring volatility using standard deviation.

I’ve also shown the interquartile range.  It is calculated as the difference between the 75thand 25thpercentiles.  That is, the 75thpercentile is the value above which 25% of the monthly returns fall.  Therefore, the middle 50% (half) of the observations fall in the interquartile range. It is also a measure of volatility that tracks fairly closely with the standard deviation for processes that aren’t highly skewed.

The last two metrics are the probability that the return is less than 0% and the average return when it falls below zero.  Interestingly, Boeing stock has a lower probability of have a negative return in a month than the Nasdaq!  It turns out that Boeing’s average monthly return is enough higher than the Nasdaq’s (6.4% versus 4.6%) to offset the higher volatility (as measured by both the standard deviation and interquartile range).

The figure below illustrates the monthly returns for the four investment options using a line graph. 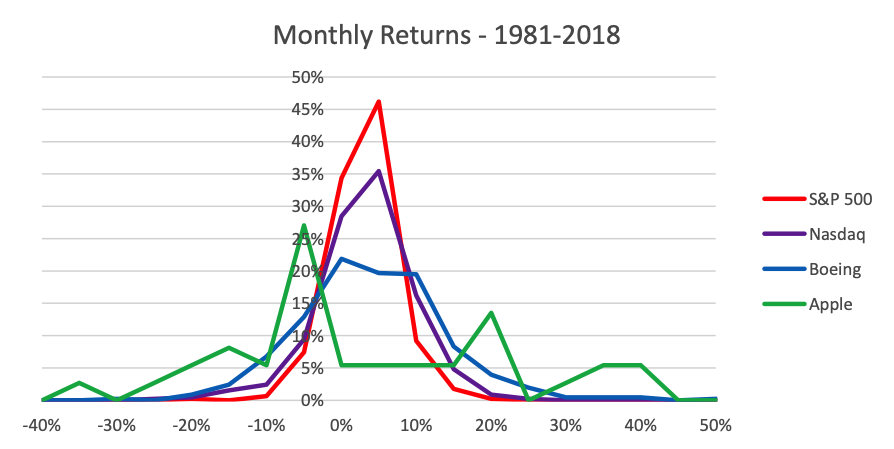 Consistent with the information in the tables above, we can see the following: 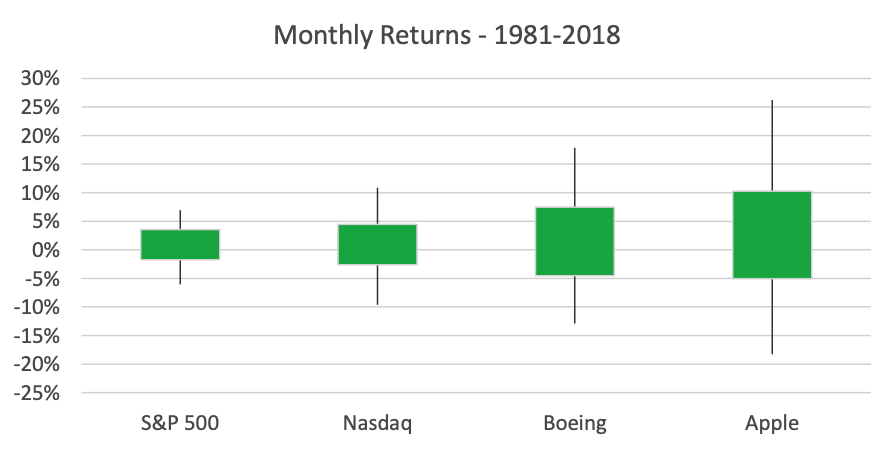 The green rectangles are the “boxes” and the lines extending above and below the boxes are the “whiskers.” In this box & whisker plot, 5% of the monthly returns for each option fall below the bottom of each whisker and 5% fall above the top of the upper whisker.  Alternately, 95% of the returns were below the top of the upper whisker. As such, 90% of the monthly returns fell in the range defined by the whiskers.

The risk of each option can be seen by comparing the height of the boxes and whiskers.  We see the same characteristics as were described for the line chart. 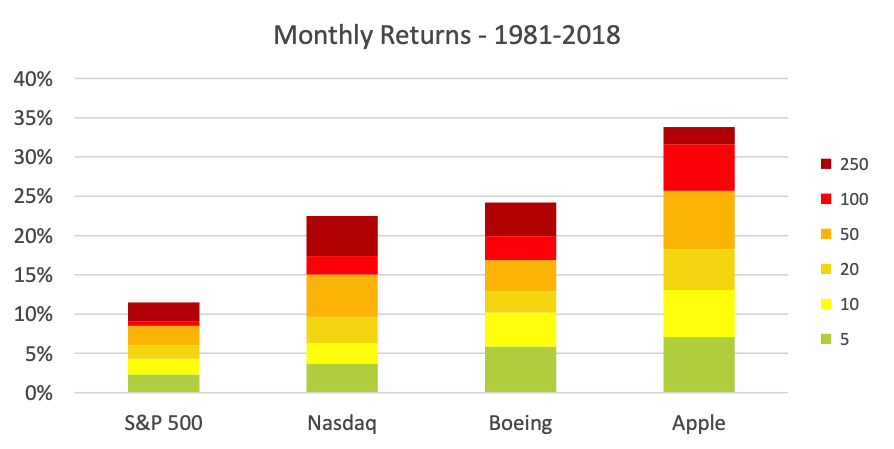 It is clear that the S&P 500 has the least risk and Apple has the most risk of the four investments.  Boeing and the Nasdaq have very similar risk, with Boeing very slightly riskier.

To be clear, I don’t anticipate that many of you will be able to create charts that look like these. I hope that by providing these examples, you’ll be able to understand any articles or graphics you read that address risk.

It is also important, in mmking financial decisions, to understand of the nature of the volatility involved.  Is it skewed like that of damage to your house?  Or, is it somewhat symmetric and short-tailed like the S&P 500?  Or somewhere in between?  If you have a good understanding of the nature of the risk involved, you’ll make a better decision.   I’ll talk more about risk and making financial decisions in my next post.