Selecting Stocks with a Score 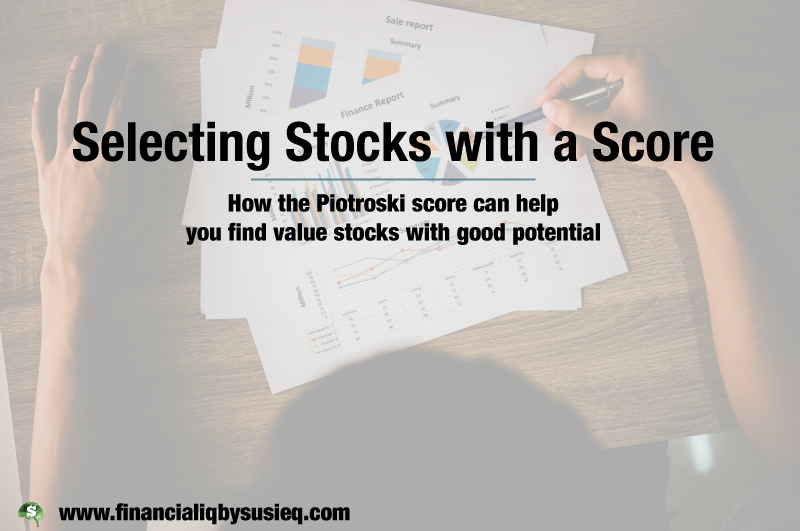 A friend of mine really likes selecting stocks with a score, the Piotroski score in particular.  Briefly, Professor Piotroski created a set of nine financial ratios that contribute to the score. If a company meets a certain criterion and has favorable results on 8 or 9 of the ratios, his analysis indicates that the company’s stock is likely to do well. My friend is primarily a value investor. The appeal of the Piotroski score to him is that it focuses on value stocks and, while it relies heavily on statistical analysis, it isn’t a black box.

In this post, I’ll identify the group of stocks to which the Piotroski score applies. I’ll then briefly explain the financial ratios that determine the score. I’ll close with a specific example of a stock I bought solely using the Piotroski score and provide some general guidance on applying the results of the score.

The book-to-market (BM) ratio is a financial ratio. The numerator is the book value of the company. This value is shown on the balance sheet in the company’s financial statements and is usually reported as “Shareholders’ Equity.”

In his paper, Piotroski identifies value stocks as companies that have BM Ratios in the highest quintile (highest 20%) of traded stocks. These stocks have high book values relative to their market capitalization. Looked at from the other perspective, these stocks have low market capitalizations (and therefore low stock prices) relative to their book value.

By comparison, the cut-off for the highest quintile of BM ratios[1] across all stocks reported in the ValueLine Analyzer Plus on May 29, 2020 is 1.47. The book values per share of these companies are almost 50% higher than their stock prices!   You can see why Piotroski might consider these stocks to be potentially good values at their current prices.

There are at least two reasons that the BM ratio might be high.

First, the market may perceive that either assets are overvalued or liabilities are undervalued. Both of these situations would cause the reported book value to be higher than its true amount.

For example, some companies have not fully funded their pension plans. That means that the estimated present value of the future pension benefits is more than the liability on the balance sheet. Companies disclose these differences in the Notes to Financial Statements. If the liability for pension benefits is understated, it will cause the company’s book value to be overstated.

Second, financial theory tells us that the market value of a company’s stock is equal to its book value plus the present value of future profits. If the market perceives that the company is unlikely to make money in the future, the market capitalization will be less than the book value.

The Piotroski score focuses on companies in the second category. That is, it attempts to identify companies that will be profitable in the future from among all of the companies that the market thinks will have negative future profits.

The Piotroski score is calculated as the sum of a set of 9 values of 1 or 0. There are 9 criteria in the calculation, in addition to the BM ratio being in the highest quintile. The process assigns a 1 if a company’s financial statement values meet each criterion and a 0 if it does not. As such, companies that meet 8 or 9 of the criteria are considered more likely to have above market average performance.

The 9 criteria are listed below:

How to Calculate It

If you are familiar with reading financial statements, you can calculate the Piotroski score yourself using the formulas above. Or, you could extract the key ratios from a source, such as ValueLine, Tiingo or Bloomberg, all three of which require subscriptions. I use the latter approach as I have a subscription to ValueLine that I use for a variety of purposes.

An easier option is to use a Piotroski calculator or screener.   I’ve never used any of these tools, but I used Google to find a couple free options you might try.

I suggest being careful to check the documentation of any of these tools to make sure that the descriptions of the 9 tests are the same as I’ve included above (which I took directly from Piotroski’s paper). In poking around on-line, I found more than one site that did not correctly specify the nine tests.

My Experience Selecting Stocks with a Score

Although I’ve looked at stocks using the Piotroski score several times, I’ve made only one purchase using it as my primary buying criterion. I purchased FUJIFILMS (FUJIY) in March 2012. At the time, FUJIY had a BM Ratio of about 1.40, as compared to a market average BM ratio of about 0.5. It had a Piotroski score of 8, having failed the test for an increase in gross margin.

For many, many years, FUJIY’s biggest product was film for cameras. With the advent of the digital camera, its market shrank rapidly. In the year before I purchased the stock, its price decreased by 32%. As I was looking at the company, it was transitioning its business from camera film to other types of related products, including medical imaging and, more recently, office products with its purchase of Xerox. With a good story and a high Piotroski score, I decided to buy the stock.

It turns out I was a little early in buying the stock. In the 12 months after I bought the stock, it decreased by 19% while the S&P 500 increased by 13%. However, if I had bought it a year later, my total return would have been much better over both the short and long term, as shown in the table below.

So, even though my returns were lower than the market average because I bought the stock too early in the company’s turnaround, I correctly decided to keep it after its first year of poor performance. That is, if I had sold the stock one year after I purchased it and bought an S&P 500 index fund, I would have been worse off.

As with any investing strategy, it is important that you understand the assumptions underlying the Piotroski score. I also recommend that you understand the story behind the company you are considering for investment, as described in my post on buying stocks based on their financial fundamentals. There are companies that may have a Piotroski score of 8 or 9 that don’t have a good turn-around story, such as the one I described for FUJIY. In those cases, you may not want to rely solely on the Piotroski score.

[1] Calculated in this case as Book Value Per Share at most recent fiscal year end divided by Price on May 29, 2020, so not exactly equal to the ratio as calculated by Piotroski.