Diversification: Don’t Get Misled by these Charts 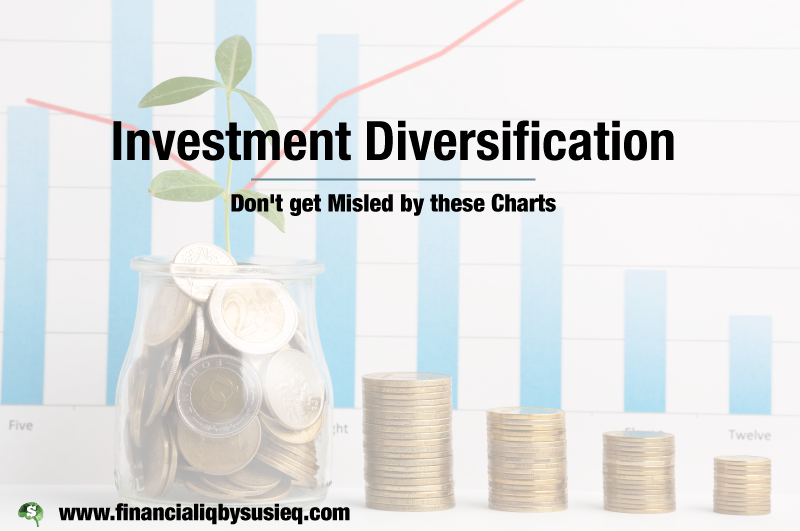 Diversification is an important component of any investing plan.  It assists you in limiting your risk either to a single asset class or a single security within an asset class.  However, I have seen a couple of graphs from which you could form the wrong conclusions about diversification.  In this post, I show you the charts, identify the wrong conclusion that could be drawn from them, and explain and illustrate the correct conclusion.

Diversification Fallacy #1: A Combination of Stocks and Bonds Provides a Higher Return than just Stocks

My Version of Chart

Because I can’t include the Schwab chart here, I created a chart (shown below) that shows a similar result for the same time period.  It compares the cumulative returns on the S&P 500 with those of a portfolio of 60% stocks and 40% 20-year US Treasuries (using an approximation I derived for older years).  The mixed portfolio is re-balanced annually, similar to the calculations in the Schwab chart.

In this graph, the ratio of the value of the S&P 500 at each year end to its value on December 31, 1999 is shown in purple.  The blue line shows the corresponding ratios for the portfolio of 60% stocks and 40% bonds.  The S&P 500 never makes up the losses it experienced in the first few years of this 18-year time period.

It wasn’t until recently that I figured out why the chart looks the way it does.  The analysis was performed in 2018, so it used the most recent complete 18-year period available.

It turns out that period was a rarity in recent history – it was one of only three 18-year periods in which bonds had a higher total return than stocks when considering all such periods from the one starting in 1975 to the one starting in 2002!  If we go back all the way to 1962, the mixed portfolio had higher returns in about a third of the 18-year periods.  The chart below illustrates this point.

Each pair of bars corresponds to an 18-year period (the time period in the Schwab chart) starting in the year shown.  The bar on the left in each pair shows the estimated cumulative 18-year return on a portfolio of 60% stocks[2] and 40% bonds[3] that is re-balanced annually.  The bar on the right shows the corresponding return on the S&P 500 during each period.  As you can see, in most recent years, the right bar (100% stocks) has a higher return than the left bar (60% stocks and 40% bonds).  In older years, the left bar tends to be higher.

How to Use this Information

If your investment goal is to maximize your return without regard to risk, a portfolio with 100% stocks will better meet that objective more than two-thirds of the time when considering 18-year periods and an even higher percentage of the time if you consider only more recent experience.  If interest rates increase substantially at some point in the future, you might look at the longer time period for deciding whether to add bonds to your portfolio, as interest rates were higher and rose in many of the years from 1962 to 1980.  But you’ll want to wait until interest rates are a fair amount higher than their current levels before those years are relevant to your decision-making.

If, however, you want to reduce volatility, adding bonds (or other asset classes) to your portfolio can help.  My post on diversification for investments provides several illustrations about how the addition of bonds to your portfolio reduces risk, but also reduces your total return.  As you consider using other asset classes to reduce volatility, you will need to consider your time horizon for your investments.  As indicated in the chart above, there have been no 18-year periods in the time covered by the analysis in which the S&P 500 had less than a 3% annualized return or 59% compounded return.

When I first saw this chart from Callan[4], I thought it was very impressed with how it illustrated the benefits of diversification. 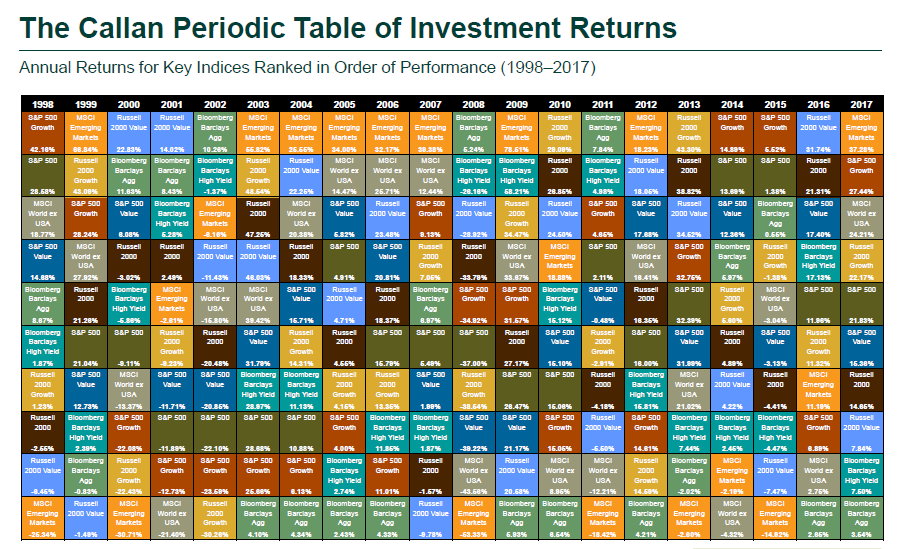 The font is small so your probably can’t read the words and numbers, but the visual impact is terrific.  Each column is a calendar year.  Each color corresponds to a different index.  The rows correspond to the order of the returns on each index in each calendar year, with the top row showing the index with the highest return; the bottom, the lowest return.

The indices by color (in the order they appear in the first column) are:

At first glance, it appears that there is a lot of diversification among these asset classes, as the colored boxes move up and down on the chart from year to year.

It wasn’t until I plotted the returns (using roughly the same colors) on a line chart that the true lack of diversification became apparent. 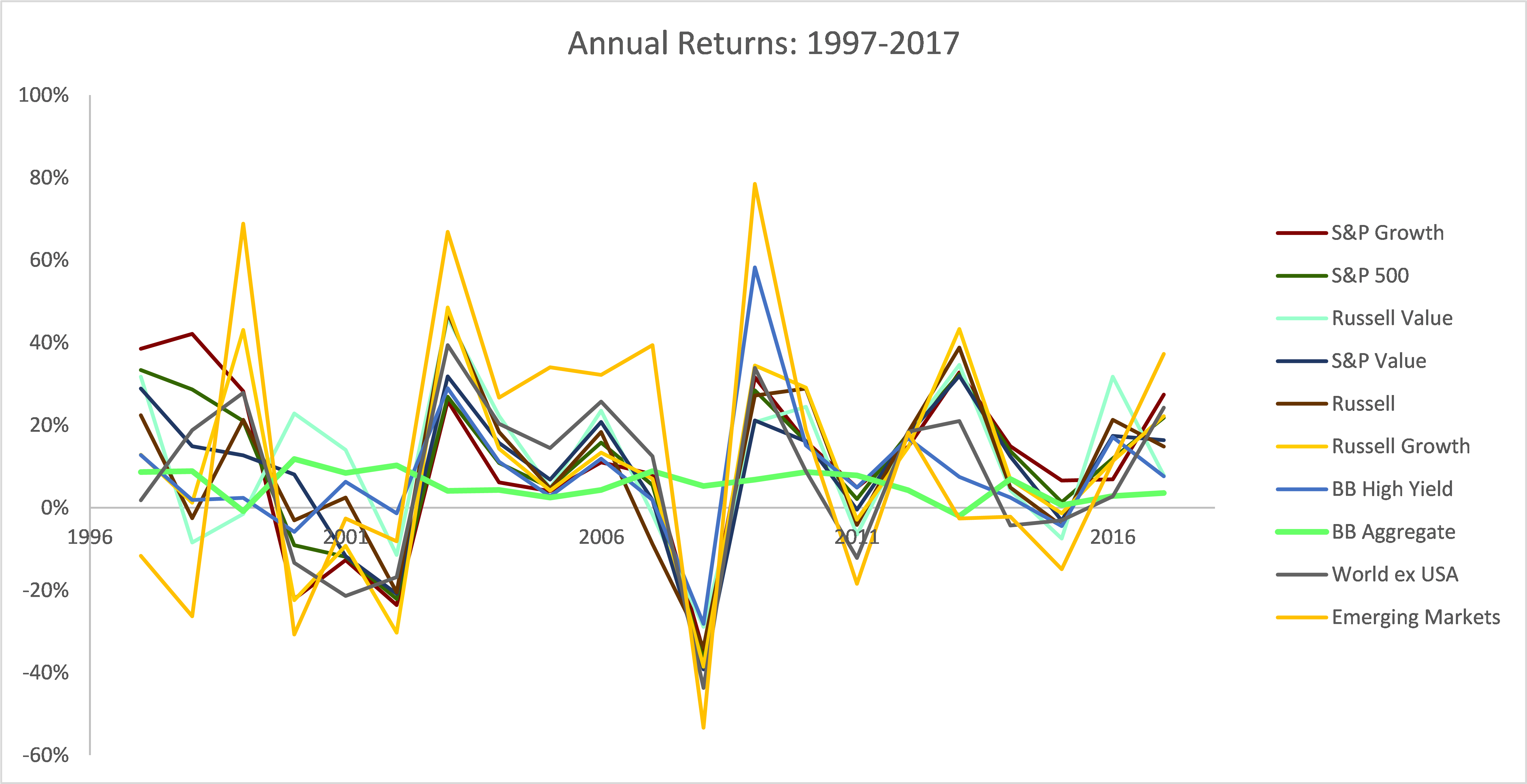 Even though the order of the indices changes, as shown in the Callan chart, most of them actually move substantially in sync.  For example, the MSCI Emerging Markets Index moves all over the Callan chart not because it adds diversification but because its returns are much more volatile.  In 14 of the 20 years in the Callan chart, the MSCI Emerging Markets Index is either at the top or the bottom.  It moves in the same direction as most of the other indices, it just makes bigger moves.

It becomes quickly apparent that the only asset class that is diversifying over this time period is US bonds (Bloomberg Barclays (BB) Aggregate US Bond Index).  If you look at the line graph above, I have made the line for the Bloomberg Barclays Aggregate US Bond Index a bit thicker than the others to help you see its lack of correlation with the other investment classes.

While I found the diversification message misleading in this chart, I still found value in the data itself.

First, as discussed above, the diversification benefit of investment-grade bonds relative to all of the stock indices is quite evident.  Interestingly, high-yield bonds are highly correlated with stocks, so don’t add diversification.

Second, I calculated the average annual return and the standard deviations of those returns.  As shown in the chart below, the different indices are spread widely along the spectrum that balances risk and reward. 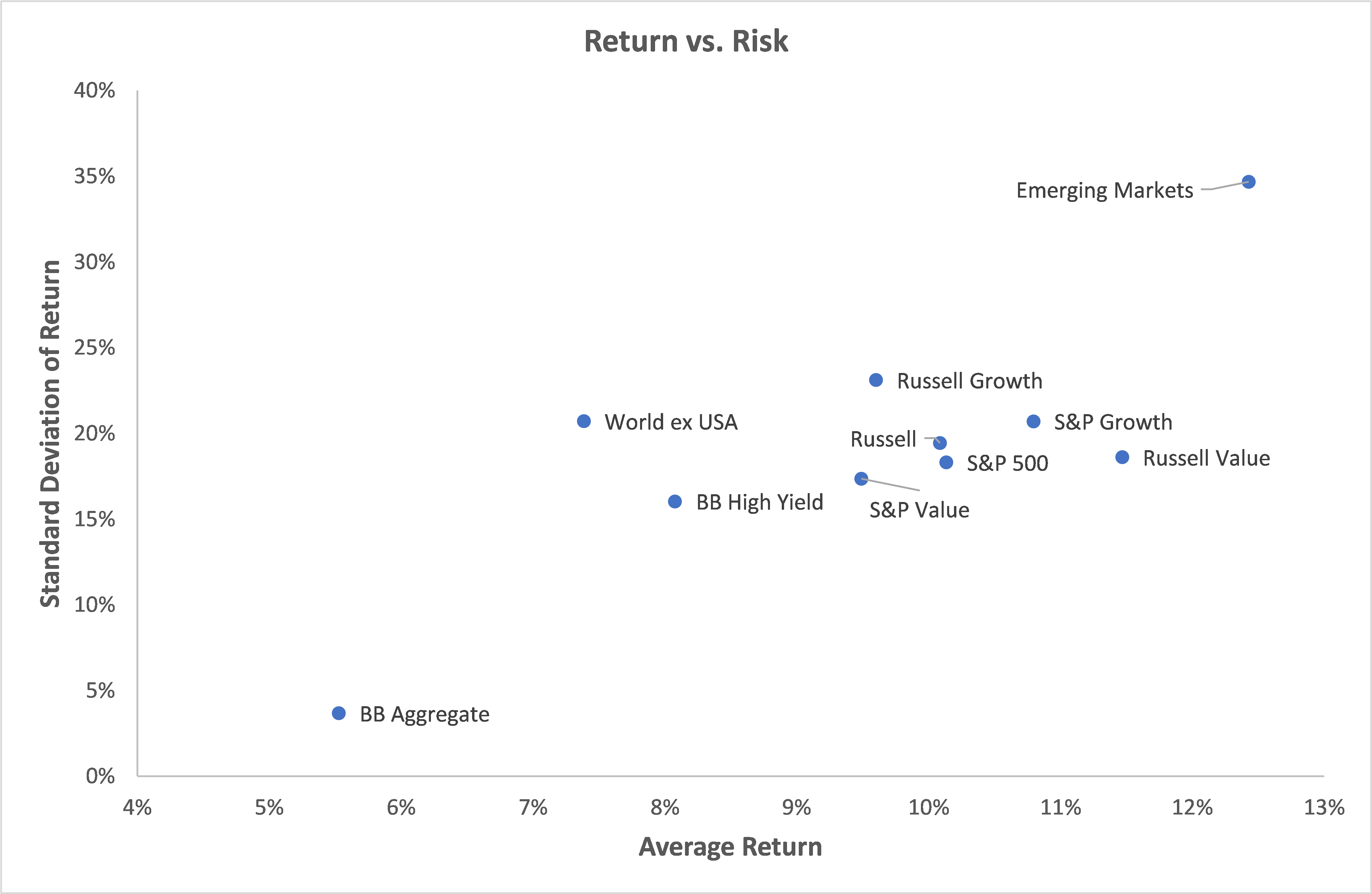 Specifically, the Bloomberg Barclay Aggregate US Bond Index is in the lower left corner indicating it has a lower average return than all of the other asset classes over this time period but also has the lowest risk as measured by the standard deviation of the annual returns.  By comparison, the MSCI Emerging Markets Index has both the highest annual average return and the highest risk, as it is in the upper right corner of the chart.  All of the other indices fall in the middle on both average return and risk.

Selecting Asset Classes for Your Portfolio

As you are choosing the asset classes in which you want to invest, you need to consider all three of average annual return, risk and diversification benefits.  For example, if you have a very long time horizon and can tolerate the ups and downs of the returns, the historical data indicates that investing primarily in the Emerging Markets index would maximize your return.

If you have a shorter time horizon or are less able to watch the value of your investments go up and down, you might want to invest in something with a lower return, such as one of the stock indices.  If you have even lower risk tolerance or a shorter time horizon, you might want to add something like the Aggregate US Bond Index to your portfolio.  It is important to recognize, though, that adding the less volatile asset classes to your portfolio, even if they are diversifying, will lower the expected annual return on your portfolio at the same time it is lowering your risk.

Caution about Using Past Findings in the Future

The relatively stable returns on the Bloomberg Barclay Aggregate US Bond Fund Index may be more representative of the time period included in the analysis and may understate the overall volatility of that index over a longer period of time.  Similarly, the other indices may behave differently in other interest rate environments.

I suggest using the information in this post to enhance your understanding of the returns, volatility and diversification benefit of the different asset classes.  You’ll want to supplement this information with your views on future economic environments before making any investment decisions.

[1] I am not able to include the chart directly in this post as I am not willing to accept the conditions that would be required by Schwab to get its permission.

[3] As measured by the iShares 20+ Year Treasury Bond Fund ETF starting in 2002 and my approximation of those returns for prior years.  I note that the Schwab chart uses the Bloomberg Barclays U.S. Aggregate Bond Index for bonds and the FTSE Treasury Bill 3 Month Index for cash.  I don’t not have access to that information.  Because I used a government bond index that tends to provide lower returns than a corporate bond index, I used 40% weight to bonds and ignored the cash component.