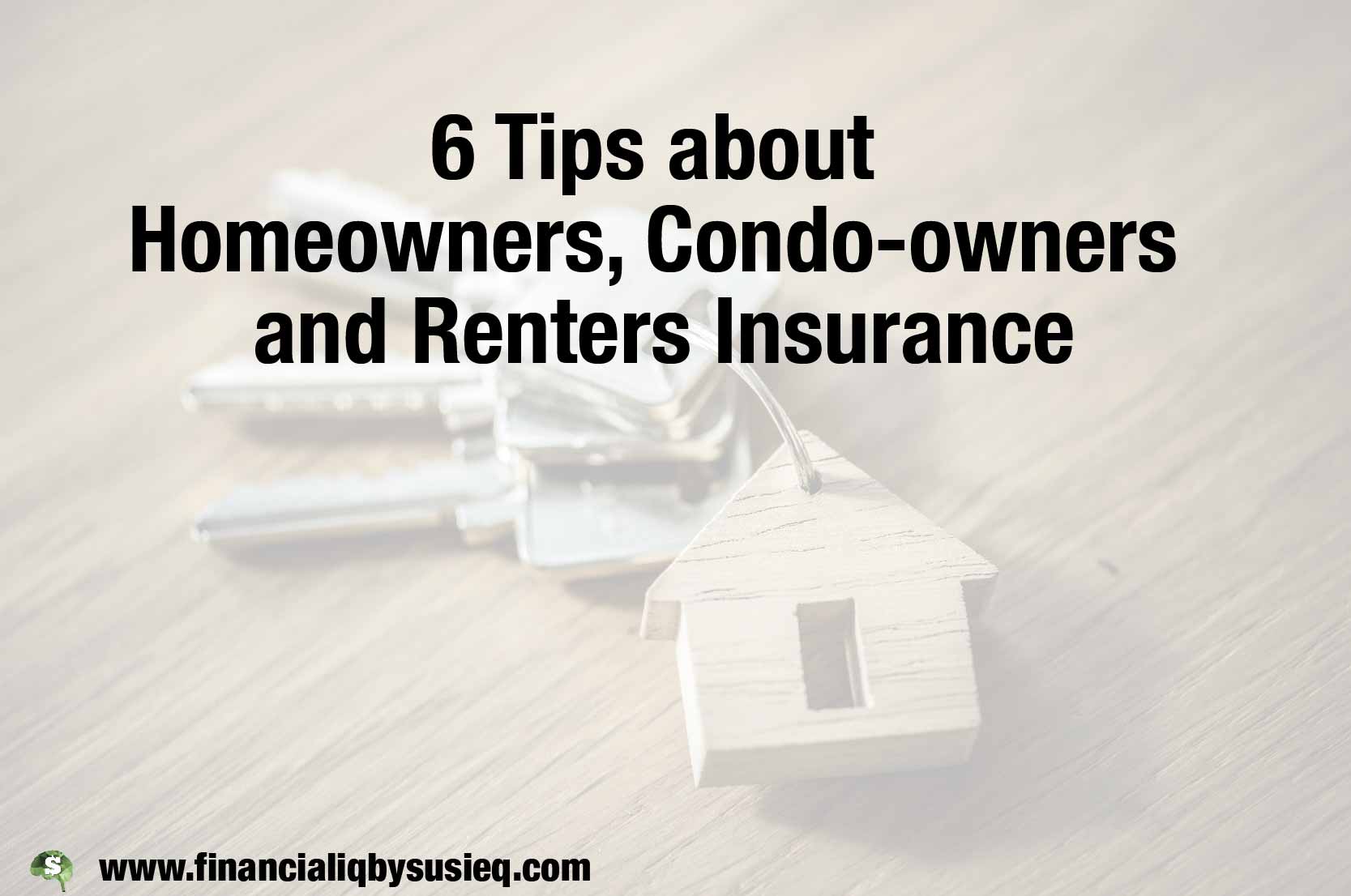 Homeowners, condo-owners and renters insurance policies cover you for loss or damage to your property and liability that emanates from your residence.  All three policies cover your belongings regardless of where they are as well as injuries to others that happen at your residence. In addition, a condo-owners policy protects you against damage to the part of your condo that you own (generally the walls in).  A homeowners policy protects you against damage to your home and any other structures. While that seems quite straightforward, there are some nuances that make the coverage more complicated. In this post, I’ll provide you six tips that will help you better understand your coverage.  In the rest of the post, I will use the term “homeowners” to include both condo-owners and renters.

If you’ve read some of my previous posts (such as this one), tip #1 isn’t a surprise!  An insurance policy is a contract and, like any other contract, I recommend you read and understand it.  To be clear, I’m referring to the 30-or-so-page document with the details of your coverage, not your declaration page which is the 2-3-page summary of what you bought.  I get a paper copy of each of my insurance policies every year. If you don’t get one in the mail, you may need to ask for one or visit your insurer’s website to get a copy.

With insurance, it is a little less critical to read the policy before you buy it, as there isn’t anything you can do to change the policy wording itself.  The wording of personal insurance policies is approved by the state or provincial insurance regulators.  Nonetheless, you’ll want to read your policy to make sure you understand what is and isn’t covered. An insurance policy is actually fairly easy to read.  My recollection from when I took actuarial exams a gazillion years ago is that the policy must be readable at the sixth grade level. So, while it has a lot of pages, it shouldn’t take you more than a half hour to read the policy (maybe a little longer the first time).

Your declaration page lists all of the coverages you purchased, the dollar amount of limit you bought for each coverage, the locations that are insured and any endorsements you purchased.  You’ll want to check this document before you buy.   Here are several things to check:

Is the location right?

Do the limits make sense?

Are there coverages you don’t need?

There are a large number of other types of endorsements that either restrict or add coverage.  The names of the endorsements on your policy are listed on your declaration page and the wording should be attached to your policy form.  If not, ask for it!

Take a look at these coverages to make sure that there aren’t any that you shouldn’t be buying. I had one relative who reviewed his declaration page and found that he was paying for sump pump failure coverage.  That endorsement covers repairs due to water seepage when a sump pump fails. His house didn’t have a sump pump, so the coverage was unnecessary. It is harder to figure out if there are endorsements you should have that you don’t. If you are insuring your first home or condo, you might want to talk to your agent or insurer to review the types of endorsements available to figure out which ones you might want to purchase.

3 – Make sure you understand what isn’t covered

A homeowners policy does not provide coverage against everything that can happen.  In fact, the policy includes a long list of causes of loss or perils that are not covered.  Many of them are not covered because they are under the control of the insured. That is, if the insured does something to cause a loss or neglects to do something that could have prevented a loss, it is considered intentional.  Intentional acts can’t be insured.

Other perils, floods in particular, are not covered because the potential losses are considered (at least by the government) to be so widespread as to be too big for the insurance industry.  If you live in a flood zone, you can buy flood insurance from the National Flood Insurance Program.

There are several sections of a homeowners policy that identify exactly what is and isn’t covered, so be sure to look for all of them.

4 – Be aware of little extras that are covered

You may be surprised by some of the costs that are insured under a homeowners policy.  You’ll want to make sure you are aware of them so you can recover the full amount you are due from your insurer.   One example is additional living expense coverage.

Additional living expense coverage pays for the increase in your living expenses so you can maintain your normal standard of living if your residence is uninhabitable due to an insured peril.  It also provides coverage if you are required to evacuate due to an emergency. That is, if you need to rent an apartment for several months or stay in a motel for a while, it will be reimbursed by your insurer.  Any reimbursement will be reduced by the portion of your deductible that wasn’t used by the damage itself.

As an example, there was a fire in a transformer in my mother’s condo building.  The building was declared uninhabitable for a little over a week. In addition, the smoke was bad enough that her walls, ceilings and all of her belongings had to be cleaned.  It turned out the ceiling had asbestos that had to be removed. The building insurance covered the asbestos abatement and cleaning, but she was responsible for the rest of her costs so submitted them to her insurer.  Her insurer not only paid to replace her belongings that were damaged by the smoke (such as her TV and computer), but also the cost of her plane ticket to my house for her initial evacuation period and the cost of a residential hotel for a month while her condo was cleaned and abated.

There are several other such extras, including financial loss if someone forges your signature and worldwide coverage for loss or damage to your personal property (not just when it is in your home).  You can find out more about these coverages when you read your policy. (Hint, hint.)

A homeowners insurance policy has a list of duties for the insured in the event of a claim.  These duties include promptly notifying your insurer or agent, notifying the police if there is a crime and protecting the property from further damage.  When you have a loss, the insurer may send someone fairly quickly to help you prevent further damage, such as drying carpet and furniture to try to avoid having to replace it or tarping or boarding up windows or roof damage.

Keeping an inventory of your belongings is one of the most important things you can do (and one that I have been remiss in doing).  If part or all of your residence is destroyed, such as in a fire, you’ll need to provide the insurer with a list of what was lost, including the quantity, replacement cost and age.  Obviously, it is impossible to keep a list of every item you own! The most important things to put on the list are those that are valuable – electronics, cameras, furniture, jewelry and watches, collectibles and the like.  It is particularly helpful, especially for unique items, if you take pictures of the items and the receipts and store them outside your residence (e.g., on the Cloud). If you have a loss, you will be able to access that information as documentation for the insurer.

6 – As always, buy the highest deductible and highest liability limits you can afford

A deductible is the amount that you pay on each claim before the insurer starts reimbursing you for your loss.  On a homeowners policy, the deductible applies only to the property coverages, not liability. When an insurer sets the premium for a policy, it has certain expenses and often a profit margin that are essentially percentages of the losses it pays to or on behalf of insureds.

You may be legally responsible for their medical expenses, lost wages and other costs of someone gets injured or dies due to a condition that exists at your residence.  If those costs are more than your liability limit (including the limit on any umbrella insurance you buy), you will become legally responsible for those costs. A higher liability limit can reduce your chance of becoming liable for these types of costs.  Of course, a higher limit also increases your premium, so you’ll need to evaluate both your deductible and the premium for a higher limit in the context of your budget.