The Best Ways to Pay Off Your Debt 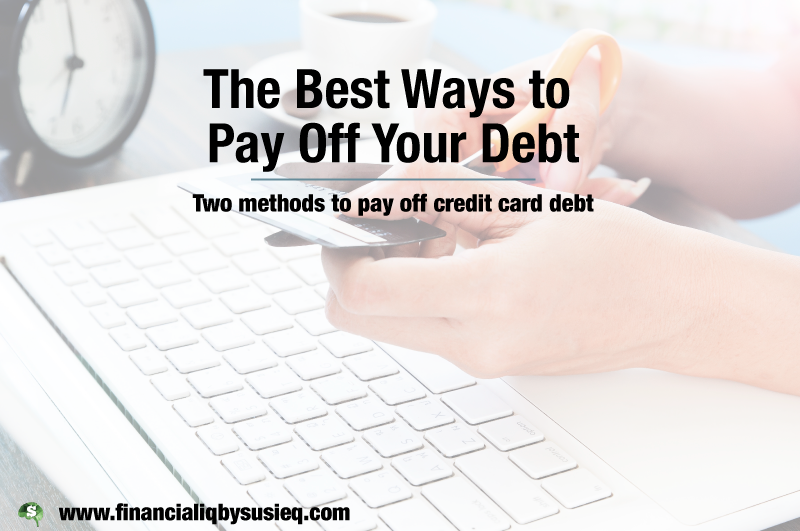 The best way to pay off your short-term and revolving debt depends on your priorities and what motivates you.  Two of the common approaches for determining the order in which to re-pay your loans discussed in financial literacy circles are the Debt Snowball and Debt Avalanche approaches.

Both of these methods apply when you have more than one debt that needs to be re-paid.  If you have only one debt to re-pay, the best strategy is to pay it down as quickly as possible, making the minimum payments as often as you can to avoid finance charges which will be added to your principal in addition to the interest charges on any portion of your balance you don’t pay.

In this post, I’ll describe how the two debt-repayment methods work using some illustrations.  I will then help you understand which approach might be better for you or you can put your information in this calculator.  For more information about the fundamentals of debt, check out my posts on loans and credit cards.

What’s Included and What’s Not

The debts covered by this post include credit cards (one kind of revolving debt), personal loans, car loans and other bills that are overdue. While longer-term loans, such as mortgages, are referenced in the budgeting process, I haven’t included them in the debt re-payment examples. If you have unpaid short-term debt, you’ll want to keep up with the payments on these longer-term loans first, but don’t need to pre-pay them. For this discussion, I will assume that you intend to re-pay all of your debts to your current debtholders. That is, you haven’t dug a hole so deep you need to declare bankruptcy and you don’t feel you’ll benefit from transferring some or all of your high-interest rate loan balances to one with a lower interest (i.e., debt consolidation).

Dave Ramsay, a well-known author on financial literacy topics, proposed the Debt Snowball method for paying off your debts.  Under this method, you do the following:

The Debt Avalanche method is very similar to the Debt Snowball method, except you re-pay your debts in a different order.

I’ve created the two examples to compare the two methods.  In both examples, I have assumed that you use a different credit card or pay cash for all new purchases until your current credit card balances are re-paid.  That is, to make progress on getting out of debt, you need to not only make extra payments on your existing debts, but also not create additional debt by borrowing to pay for new purchases.  It’s tough!

In this example, you have two debts with the balances due, interest rates and minimum payments shown in the table below.

Under the Debt Snowball method, you will use the additional $60 a month you have to pay off Debt 2 first, as it has the smaller balance.  That is, you will pay the minimum payment of $30 a month on Debt 1 and $70 a month on Debt 2 for 8 months, at which point Debt 2 will be fully re-paid.  You will then apply the full $100 a month to Debt 1 for the next 17 months until it is fully re-paid

Under this approach, you will have fully re-paid both debts in 25 months and will pay $428 in interest charges.

In Example 1, you will use the additional $60 a month you have to pay off Debt 1 first under the Debt Avalanche method, as it has the higher interest rate, whereas you used the additional amount to pay off Debt 2 first under the Debt Snowball method.  That is, you will pay the minimum balance of $10 a month on Debt 2 and $90 a month on Debt 1 for 20 months, at which point Debt 1 will be fully re-paid.  You will then apply the full $100 a month to Debt 2 for the next 4 months until it is fully re-paid

Under this approach, you will have fully re-paid both debts in 24 months and will pay $352 in interest charges.

In this example, you have five debts with the balances due, interest rates and minimum payments shown in the table below.

Example 2 is a bit more complicated because there are more debts.  As a reminder, under this approach, you apply all of your extra payments ($230 in this example) to the smallest debt at each point in time.  In this example, you will make the additional payments on your debts in the following order:

In this example, you will make the additional payments on your debts in the following order:

It turns out that Debt 2 is fully re-paid in 20 months even just making the minimum payments.  Debt 5 is paid off 7 months later again with only minimum payments, followed by Debt 1 2 months later.  As each of these debts is re-paid, the amounts of their minimum payments are added to the payment on Debt 3 until it is fully re-paid after 39 months.  At that point, the full $500 a month is applied towards Debt 4 which then takes only 2 additional months to fully re-pay.  In total, it will take 41 months to re-pay all of your loans and you will pay $5,094 in interest.

Looking at the two examples, we can get a sense for how much more interest you will pay if you use the Debt Snowball method instead of the Debt Avalanche method.  The table below compares the two methods under both examples.

In these two examples, you pay more than 10% more interest if you use the Debt Snowball method than the Debt Avalanche method, leading to one or two additional months before your debts are fully re-paid.

Dollars and Sense – In General

The difference in the amount of additional interest depends on whether your debts are similar in size and the differences in the interest rates.  I’ll take that statement apart to help you understand it.

The graph below illustrates the impact of the differences in interest rates and sizes of two loans on the difference in the total interest paid.  To create this graph, I took different variations of Example 1.  That is, you have two loans with outstanding balances totaling $2,000 and the interest rate on the larger debt is 20%. 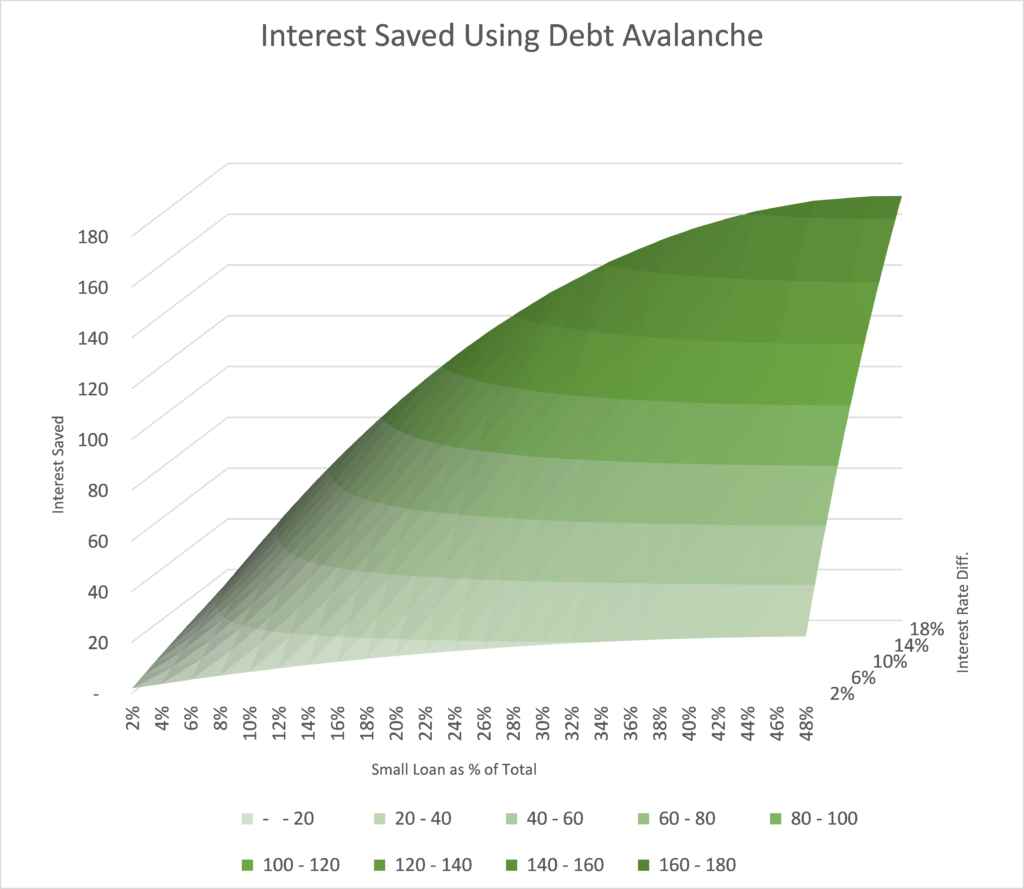 How to Read the Axes

The green curve corresponds to the total interest paid using the Debt Snowball method minus the total interest paid using the Debt Avalanche method.  For example, at the front left, corresponding to the small loan being $40 with an 18% (=20% – 2%) interest rate, there is a $2 difference in the amount of interest paid.  At the other extreme, in the back right of the graph (0% interest rate on a small loan with a balance of $960), you will pay $167 more in interest ($308 versus $140 or more than twice as much) if you use the Debt Snowball method rather than the Debt Avalanche method.

For many people, debt is an emotional or “mental-state” issue rather than a financial problem.  In those situations, it is more important to gain a sense of accomplishment than it is to save money on interest.  If you are one of those people  and have one or more small debts that you can fully re-pay fairly quickly (such as Debts 2 and 5 in Example 2 both of which were paid off in six months under the Debt Snowball method), using the Debt Snowball method is likely to be much more successful.