The Case for a Few Good Stock Runners 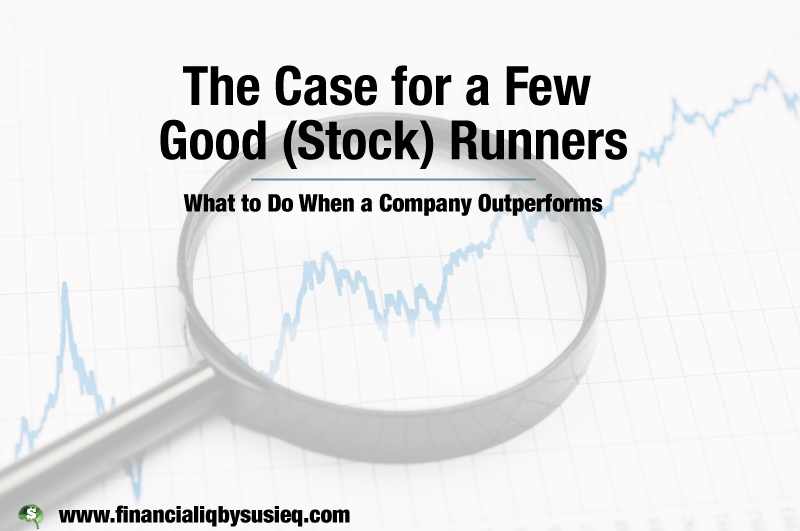 Many investors limit the amount of their investments in individual companies to manage the risk in their portfolios.  Others advocate holding on to stocks whose prices increase faster than the rest of your portfolio (which I’ll call stock runners) as long as the reason you bought the stock in the first place continues to hold true.  I’ve taken the latter approach with my portfolio with some success.

In this post, I’ll talk about how many stocks you might want to hold in your portfolio to maintain diversification.  I’ll then explain both strategies for dealing with stock runners in more detail.  I’ll close with an explanation of how the strategy of holding on to stock runners worked for me and provide examples of when it wouldn’t have worked.

How Many Stocks to Hold

If you plan to invest only in individual stocks (as opposed to including mutual or exchange-traded funds in your portfolio), many advisors recommend that you make investments in at least 10 companies.  Ten provides a balance between the amount of time needed to research a possibly longer list of companies to make an informed decision and creating diversification.

The goal of diversification is to reduce the impact of the poor performance of one stock on your total portfolio returns.  In my post on diversification and investing, I used PG&E as an illustration.  The chart below shows PG&E’s daily stock price over the 12 months prior to PG&E declaring bankruptcy in early 2019. 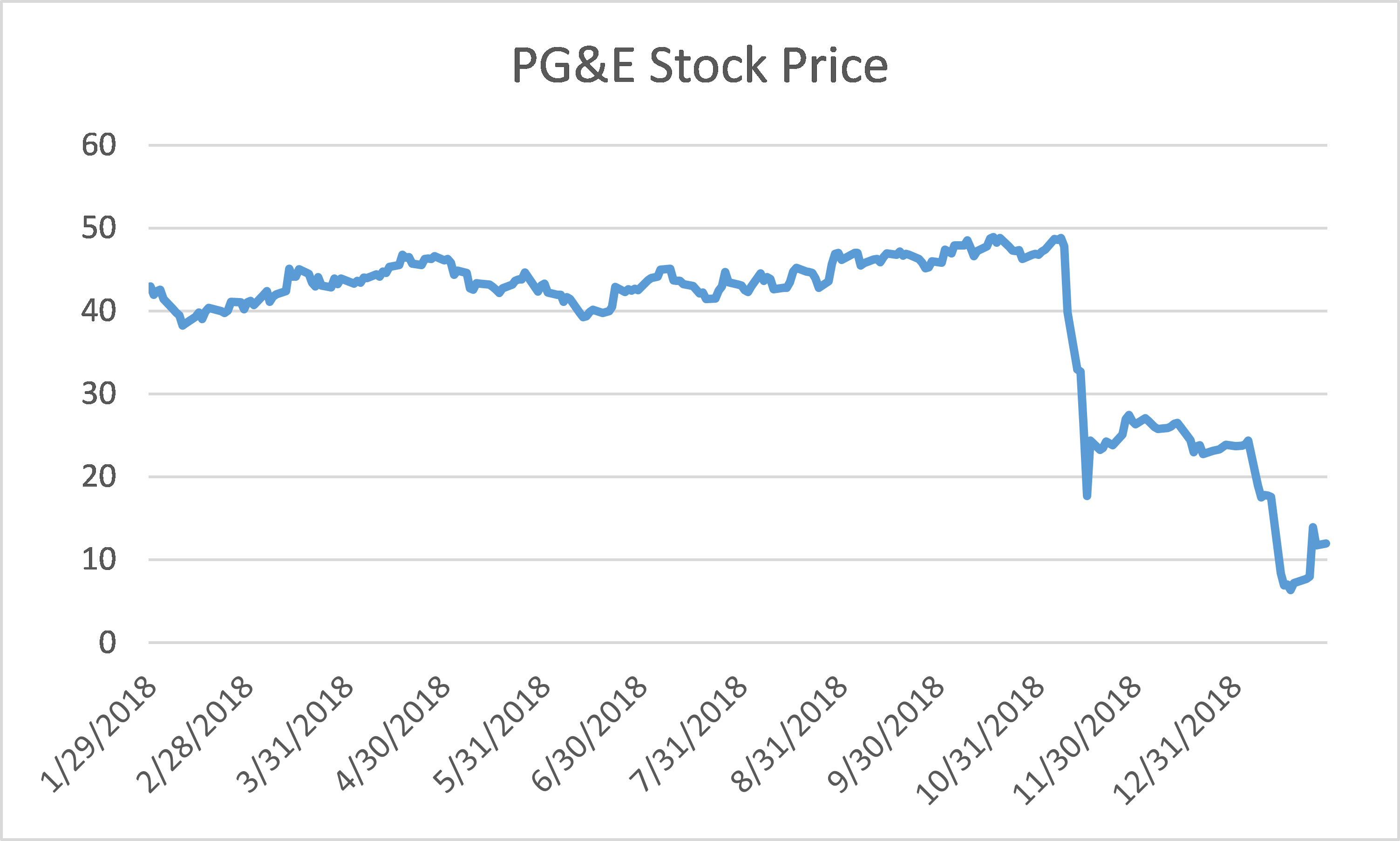 The Benefit of More Stocks

Although diversification can’t completely protect you from such large losses, it can reduce their impact especially if you invest in companies in different industries.   If the only company in which you owned stock was PG&E, you would have lost 72% of your investments in one year.  If, on the other hand, you had owned an equal amount of a second stock that performed the same as the Dow Jones Industrial Average over the same time period (-6%), you would have lost 39%.  The graph below shows how much you would have lost for different numbers of other companies in your portfolio. 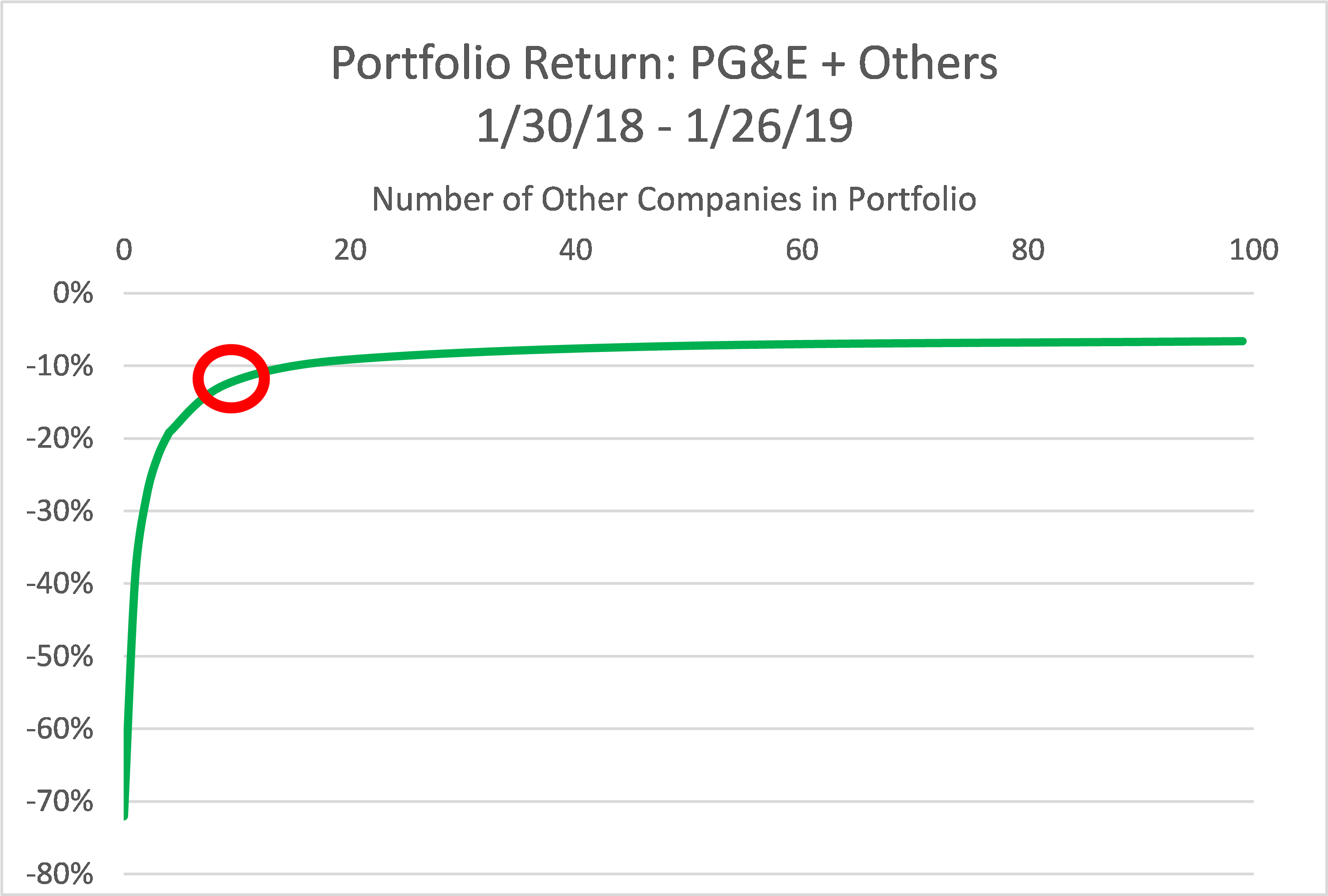 This graph shows how quickly the adverse impact of one stock can be offset by including other companies in a portfolio.  In a portfolio of five stocks (PG&E and four others that performed the same as the Dow), the 72% loss is reduced to about a 20% loss.  With 10 stocks (circled in red), the loss is reduced to 12.6% which isn’t much worse than the 6% loss for the Dow Jones Industrial Average.

The curve starts to flatten out quickly at about 10 stocks, supporting the common rule of thumb that a portfolio of only individual stocks should have representation from at least 10 companies.

Options When You Own Stock Runners

There are two schools of thought about how to treat stock runners.

When Holding on to Stock Runners Works

The chart below shows what would have happened if I had managed this portfolio since May 2, 1992 under the two different strategies.  The purple line shows the strategy I use – buy and hold or let stock runners run.  The green line shows what would have happened to the value of the portfolio if I had trimmed my positions in Neogen and Boeing once a year so that the mix was 10% in each of Neogen and Boeing and 80% in the S&P 500. 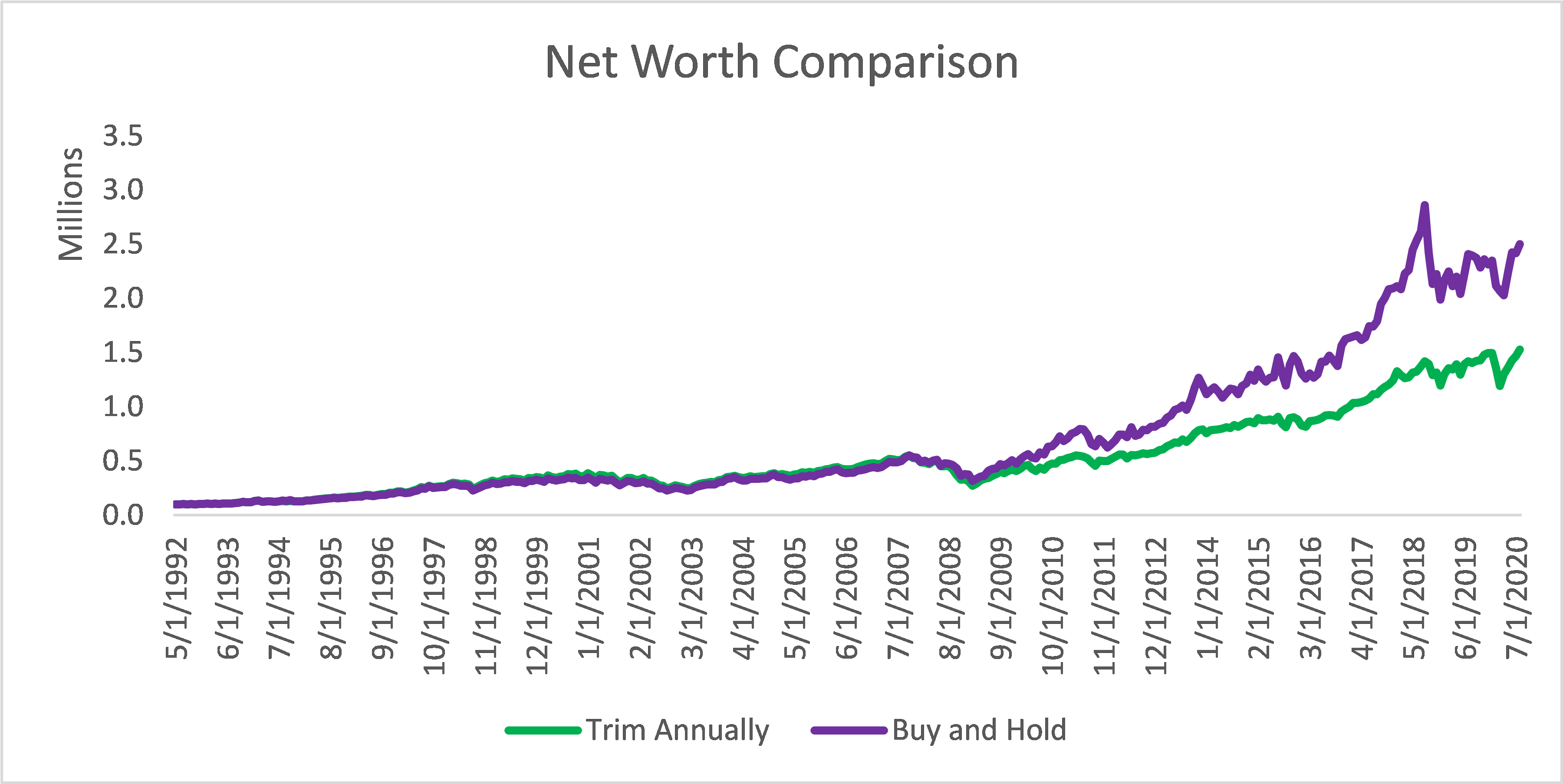 The Benefit of Keeping Stock Runners

From 1992 until mid-2008, there really wasn’t much difference in the results of the two portfolios.  Since then, both Boeing and Neogen have significantly outperformed the S&P 500.  The purple line therefore moved above the green line and has consistently stayed higher.  On August 1, 2020, the purple line shows that the buy-and-hold portfolio had a value of $2.5 million.  The trimmed portfolio (green line) had a value of just over $1.5 million on the same date or only 60% as much.

Boeing had particularly poor results in the 10 months starting in October 2019.  Its price on August 1, 2020 was only slightly more than half of what it was on October 1, 2019.  Similarly, Neogen hit a high of 200 times its May 1, 1992 price in April 2018.  You can see these peaks in the purple line in the chart.  Even with these significant declines in Boeing’s and Neogen’s prices recently, the buy-and-hold strategy produced 66% higher returns.  If I had been able to anticipate these decreases and thinned my positions in these two companies in 2018 or 2019, my net worth on August 1, 2020 would have been even higher.

I caution that this example is somewhat extreme.  There are very few stocks, such as Neogen, that have produced such consistently high returns.  Nonetheless, the illustration highlights the benefits and risks of letting your stock runners run.

When Trimming Your Positions is Better

Before you get too excited about the buy-and-hold strategy, you should know that you can’t use it blindly.  I’ll use the examples of General Electric (GE) and Pacific Gas & Electric (PG&E).  I owned GE for a while and have a family member who owned PG&E, so am familiar with both companies.  From May 1, 1992 through early 2017, GE significantly outperformed the S&P 500 (increasing in price by a factor of 30 vs. 5.5) and PG&E produced roughly market returns, but was considered a reliable stock with a generous dividend.  Starting in 2017, both companies encountered financial difficulties and lost substantial portions of their market value.

The chart below shows the same comparison as above – buy-and-hold vs. trimming your positions – using GE and PG&E in place of Neogen and Boeing. 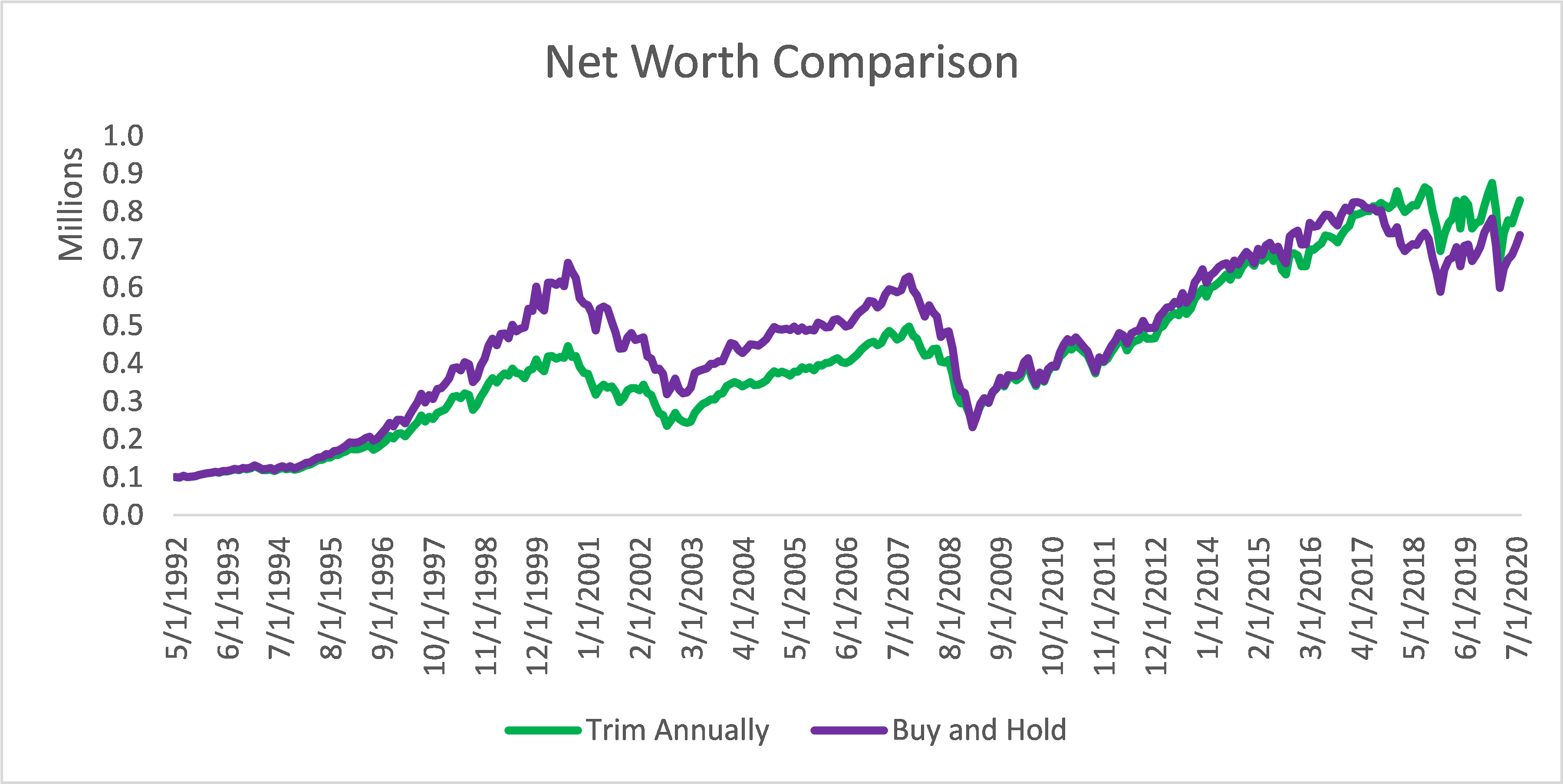 While the companies were doing well (up to the 2008 financial crisis), the buy-and-hold strategy produced better returns.   For the next 8 or 10 years, the two portfolios performed similarly.  Once the two companies encountered difficulties, though, in 2017, the annual trimming strategy started to outperform.

The conclusion that I draw from these illustrations is that, as long as you think a company can outperform the market, you will likely be better off letting your stock runners run.  However, if something changes at the company, you will likely be better off trimming the larger positions in your portfolio, at a minimum, or selling all of your stock in the company.  This conclusion reinforces the points Peter Lynch made in his book, One Up on Wall Street, that you should know the story behind every stock you own.  Brandon Smith makes a similar recommendation in his guest post for me that changes in a company’s management, market or financial position can be important sell signals.